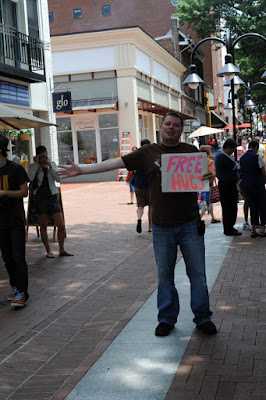 I took this photo a couple of years ago at the Festival of the Photograph in Charlottesville. VA. A fellow photographer posted a similar "Free Hugs" photo yesterday at Pbase. Some of the comments were "No way!" and "I'll pass on the hug!" and I can understand that reaction. The world we live in has become a place where we are immediately wary of anything free, let alone an invitation to make physical contact with a stranger. This is with good reason of course. There's no shortage of people in the world willing and able to take advantage of anyone who dares to trust.

Don't get me wrong - I don't fantasize about a world that is one big hug-fest. Hugs will never rid the world of evil, but wouldn't it be nice if we didn't assume that a hug had an ulterior motive? Or that people didn't feel the need to wear a sign offering free hugs?

By the way, I gave a hug to the guy in this photo... I felt I was in a safe environment and I wasn't alone. I have to admit though, that on the streets of downtown Atlanta - I would have passed by him... quickly.
Posted by Faye White at 9:58 AM 3 comments: 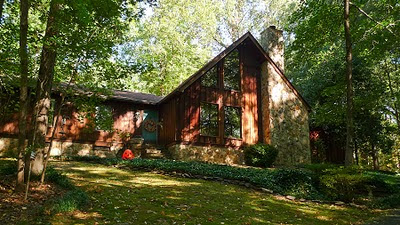 As you can see, it's a beautiful day in the neighborhood. The leaves are slow in changing color this year - possibly because the hot weather stayed through September?

I looked at the utility bill lying on my desk this morning and realized that I still haven't put the utility accounts in my name... more loose ends that seem to get pushed aside as they aren't critical to daily life. But I know that to be thorough I need to take care of these types of things, so I'd better start a list.

But there's a more urgent problem that needs to be addressed... squirrels have eaten a hole through the siding and into the garage attic area, so I need to A) figure out how to cut a small piece of wood to cover the hole and B) nail it into place. It won't be pretty...
Posted by Faye White at 12:29 PM 1 comment: 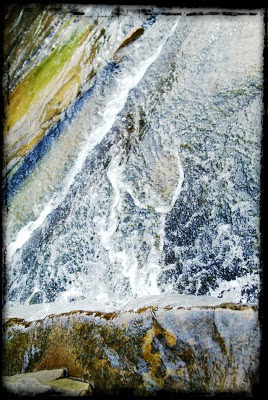 Nothing is working these days... Life's a struggle that repeats every twenty-four hours. I know that I have to move forward... look forward.

This year marks twenty-three years of being cancer free. In the past I have always given myself a little high-five for still being here. This year, I don't feel as though I have survived.

I'm not producing any photographs that make me happy, although I sold three prints last month.

I am reminded of something a friend once wrote:

"Being aimless is looking at a flower and seeing a flower. Aimless would be never confronting fear or seeking an understanding of its cause and being held captive by it. Aimless is living on one’s knees. Aimless is being someone else and never knowing it.


And as often as necessary, breathe"