It's a beautiful day in the neighborhood... 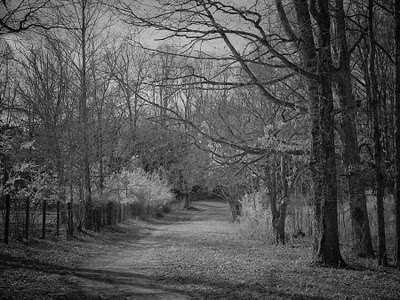 I listened to the news before getting out of bed this morning... I really shouldn't do that, it sets a bad tone for the rest of the day. But on the upside, I met two of my neighbors while I was delivering the trash to the curb this morning. Pete and Sally live behind me and they've lived there for twenty years. I've seen them walking in the neighborhood every morning (rain or shine, hot or cold) but I never knew where they lived. I know that sounds odd and it is. My house is set way back from the street, so waving and saying "Hi" to passers-by doesn't happen. And in the summer, when the leaves are on the trees, I'm even more secluded. I like (love!) the privacy, but it doesn't promote chit-chat over the backyard fences. And although they live directly behind me, the trees block a clear view of their house from mine. But I have noticed them working in their garden over the years.
So... now I know Pete and Sally. :)
Then I went to the park with my IR camera...
Posted by Faye White at 1:30 PM 3 comments:

Perseverance in less than 420 characters... 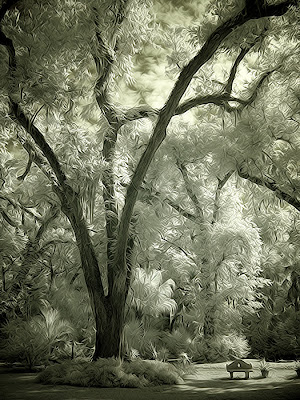 So... what was so important? Well, I had struggled with a problem and it seemed that I wasn't going to get a resolution. I hate to give up; it's both a blessing and a curse. When my hard drive failed last month, I had to reinstall everything. I had been using a Photoshop Plugin from Topaz Labs for a couple of years and it was one of my faves. However, after the hardware failure, I lost a ton of emails - one of them being the license key for this product. I'd searched everywhere for it for nearly two days. This particular product has been replaced by two new products; which, if all else failed, I could purchase those and have the same capabilities - but... :( So, I sent an email to Topaz Labs and they re-sent the license key. Yay!!!

Moral of the story... keep the licensing information in a safe place.

What does the above photo have to do with this? It won a couple of contests and was processed using the PS filter that I now have back in my toolbox. :)
Posted by Faye White at 11:29 AM 2 comments:

On this day in 1992, I arrived in Caracas, Venezuela for my second three-week stint as an IT consultant for the local cell phone company. The first indication that something was amiss was when we were met at the airport by a limo driver. Although this was part of our contract, it hadn't happened on our first trip in January. Five of us and our luggage piled into a town car and we headed for Caracas. Soon after leaving the airport, the limo driver spoke with someone on a walkie-talkie and told us that there had been a fire in the tunnel between the airport and Caracas and we would have to take the longer route to the city. Another red flag, although we didn't know it at the time.

We saw many military vehicles along the road... with soldiers... with guns. There was always a large police and military presence in Caracas, but it seemed heightened on that night. Someone asked the driver about this and he said there had been a big drug bust and that was the reason for the extra security. That made sense to us - afterall, this was Venezuela.

We continued to the city and we were dropped off at our hotels around midnight. All seemed calm and normal until the next morning. The project manager called me and said that there had been an attempted coup d'etat overnight and it was being reported by CNN. He suggested that I call my family to let them know that I was alright. I hadn't heard any unusual noises during the night and I called my family to reassure them that I was fine.

No sooner had I hung up the phone when I began to hear gunfire and what I would later learn was mortar fire. You see, the hotel where I was staying was adjacent to a private/military airport and the fighting had moved from the downtown area to the airport. Of course, we were advised not to leave the hotel for safety reasons. We gathered downstairs in the hotel restaurant and discussed our predicament/situation. The project manager had called the US Embassy and was told that we could go there, but because of the proximity of the hotel to the fighting, it would be safer to stay where we were. To say that this was surreal for me is an understatement. In the past, whenever I heard of Americans finding themselves abroad during this type of event, I thought to myself "Well, they should have known better!" And I should have. When the recruiter called me about this assignment, he said that Venezuela was the most stable democracy in South America. That was probably true, but everything is relative, right?

Anyway, back to the battle... on the opposite side of the airport from my hotel were several tall office buildings and the military had placed snipers on top of these buildings. There were also military tanks and trucks in the streets next to the hotel. This was all visible to me as I peeked carefully from behind the curtains of my hotel room.

We all agreed to meet in one of the rooms that did not face the airport.. to pass the time playing poker. Most of us were staying on the fifth floor. I remember this because after I had gone back back to my room for a while and then headed back to the game, just in that ten minute time lapse, a bullet had come through the window of an empty room, through the door and lodged in the hallway wall.

By the end of the day, the coup had failed and the military had retaken control of the airport. We all went back to the office the next morning, although we heard sporadic gunfire in the neighborhoods surrounding the office building throughout the day.

I finished my four-month contract, but when they asked me if I would extend it, I declined. Even without a coup d'etat, Caracas was too dangerous for me. 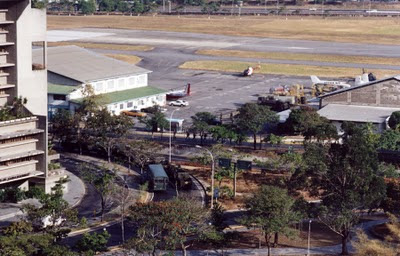 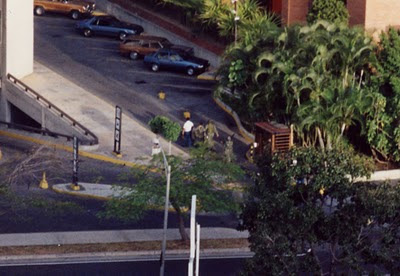 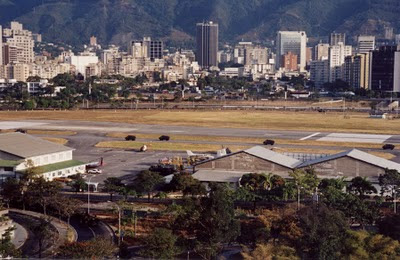 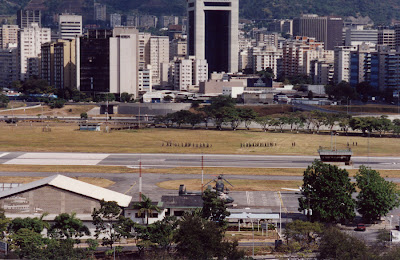 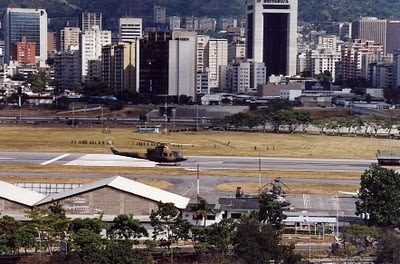 Noticed the boarded-up windows in the building. 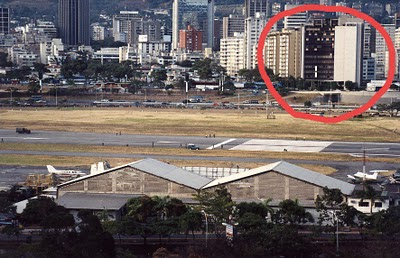 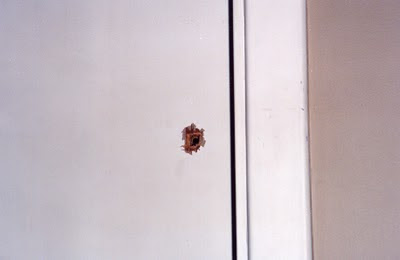