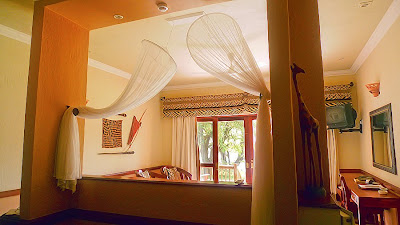 This was one of my favorite places on my tour - Chobe Safari Lodge, Botswana. After two nights in Johannesburg, this was my introduction to "the wild" No tent camping for me! Through those doors and across an expanse of lawn is the Chobe River. There was plenty of wildlife roaming around the grounds.... monkeys, wart hogs and exotic birds to name a few. I was there for three nights and when we left, I was wishing that I could stay for another week. It was so peaceful and relaxing. I think I was just beginning to recuperate from the long flight and the urban setting of Jo'burg.
Posted by Faye White at 2:51 PM 1 comment:

Long Ago and Far Away A year ago, I had just arrived in South Africa and was on a tour of Soweto. This photo was taken inside Nelson Mandela's home.

We also visited the monument commemorating the 1976 Student Uprising: 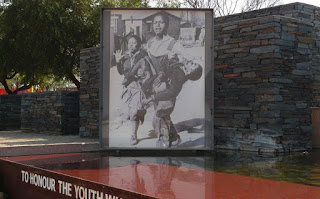 We had lunch at the Sakhumzi Restaurant: 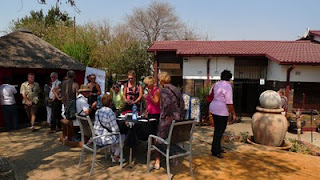 This is a popular place and was quite crowded. The food is served buffet style and the line was long. The closer we got to the food, the more people cut in front of me in line. Eventually, most of my group had filled their plates and were on their way back to the table. One of the last of my tour group, who was about seven or eight people ahead of me, reached through to take my arm and pull me up to where he was. I'd probably still be there... in line... had he not come to my aid.

This was my first full day in South Africa and I think my body was still adjusting to the time difference and the long flight.
Posted by Faye White at 10:46 AM 1 comment: