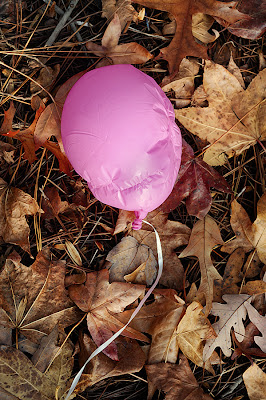 A couple of weeks ago, I found this pink balloon in the bushes along my driveway. No idea where it came from... a birthday party? The birth of a baby girl? Anyway, I brought it up to the house, intending to put it in the trash, but dropped it into the recycle bin instead. And then I forgot all about it as the recycle bin filled up. Yesterday, after the trash had been emptied, I noticed the balloon lying by the street in front of my house. Apparently it was rejected as a recyclable item.

As I left this morning to run some errands, I stopped and took this photo and then I put it inside the car - once again with the intention of throwing it away. As I finished my last errand, I opened the back door of the car and out it flew (it's very windy today). I turned to try to catch it again but it was out of sight.

Sort of reminds me of the lost and found pens we wrote about. Wonder who's going to have it next. :-)